Just want to let you know, that I've moved this blog here:
http://honorthedog.wordpress.com/
So to keep up to date on what's going on, come on by and visit.
See you there!
Posted by Sang Koh at 10:38 PM No comments:

Protecting That Which Matters Most

In The Matrix Reloaded, there is a scene when Neo, the story's main protagonist, meets Seraph, the protector and guardian of the Oracle. The scene unfolds like this:

Seraph: You seek the Oracle.

Neo: Who are you?

Seraph: I am Seraph. I can take you to her. But first, I must apologize.

At this point Seraph attacks Neo and a fight ensues between them. And just as quickly as it had begun, it stops, and the conversation continues:

Seraph: The Oracle has many enemies, I had to be sure.

Seraph: That you were The One.

Seraph: You do not truly know someone until you fight them.

So what does this scene and dialogue from a movie have to do with dogs? A lot.

Let me start by saying that NDT isn't for the weak of heart. To fully commit to the process requires strength of heart and character, and a readiness to explore the uncharted regions of the emotional landscape of both your dog and yourself. Because once you open up the Pandora's Box of unresolved emotion that lives in the heart of your dog, there is no going back.

This process isn't about dog training, or even relationship building. It's about truth. Finding and uncovering the deep hidden truths that are cloaked under the surface of our personalities. Personality is a lie. It's a well-intended lie, but it is still a lie. And no one can see through that lie as easily as your dog. The truth, YOUR truth, lies inside him, ready and waiting to be discovered. But you have to be ready to fight for it.

After the fight is over, Seraph takes Neo to the Oracle, and Neo asks him:

Neo: Are you a programmer? (Seraph shakes his head no)

Neo: Then what are you?

Seraph: (pauses then faces Neo) I protect that which matters most.

Your dog is your Seraph. He protects and keeps safe that which matters most. That is his role, and as all dogs do, he takes on that role with relentless passion and commitment. The problem is that we often misread and misunderstand his passion, believing that he is the one who needs to change. But it is us who need to change. It is us who need to embrace and embody his passion and fire. His commitment and determination to protect that which is sacred. To protect that which matters most. Your heart. 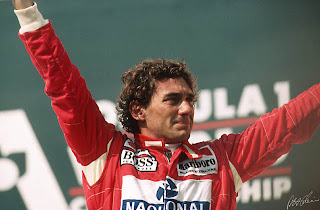 Summer is coming here in the northwest, and that means long, gorgeous days. I'm lucky and blessed to live in an area that isn't too crowded and is within walking distance to the beach. So I took advantage of it and took Jackie with me to watch the sunset and the ferry.
Posted by Sang Koh at 9:56 PM 3 comments:

Your Dog Is Your Mirror 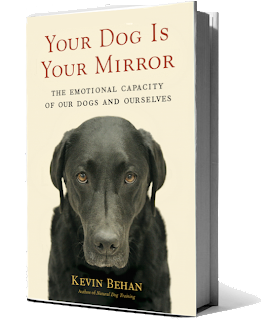 In the late 80s, early 90s, Kevin Behan published the book Natural Dog Training. It was a complete and total paradigm shift in the world of dogs, as Kevin's theory was based on the notion that dogs are emotional beings. Almost 20 years later, and Kevin has released a follow up to his seminal work, Your Dog Is Your Mirror. It's a profound and provocative book that explores on a deep level the human dog connection.
Go to the Natural Dog Training website to learn more about it.
http://naturaldogtraining.com/
Posted by Sang Koh at 12:02 AM 1 comment: 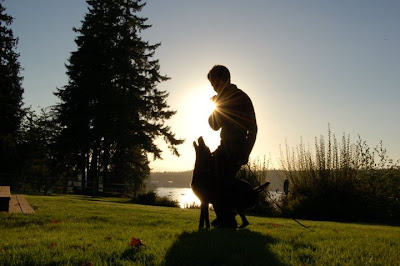 A photo my wife took of me working with Jackie on some heeling.
Posted by Sang Koh at 11:42 PM No comments:

Are you the emotional center of your dog's universe? How would your dog respond when seeing a deer, a rabbit, a squirrel, or any other prey like being? Would he bolt after it when it takes flight, or would he look to you for resolution.
Watch the linked video to see how Hessian, Kevin Behan's dog, reacts after seeing a deer on the Behan property.
If you are having trouble seeing the video here, click on this link to watch it on youtube.
http://www.youtube.com/watch?v=pzRqiGrh-nQ&feature=player_embedded
Posted by Sang Koh at 1:44 PM No comments: